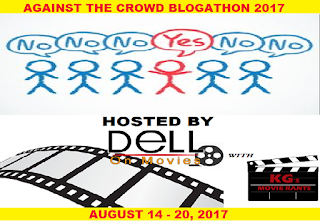 This blogathon is hosted by Dell On Movies. I also know the font changes in the post. Blogger is so rubbish I no longer care.

1. Pick one movie that "everyone" loves (the more iconic, the better). That movie must have a score of 75% or more on rottentomatoes.com. Tell us why you hate it.

2. Pick one movie that "everyone" hates (the more notorious, the better). That movie must have a score of 35% or less on rottentomatoes.com. Tell us why you love it.

3. Include the tomato meter scores of both movies.

4. Use one of the banners in this post, or feel free to create your own.

5. Let us know what two movies you intend on writing about in one of the following ways:
6. Publish your post on any day from Monday August 14 through Friday August 20, 2017.

You know what? I have an irrational dislike of people who piss off to the woods to live with the animals because living with us slobbering, disgusting plebs is too much for them to handle. They want to be away from technology yet use technology to let it be known that they are sooooo much better than us robots glued to screen tweeting random celebrities hoping to get a response so we can validate ourselves in the social media world.

The reason I hate this film is I honestly found the central character quite infuriating at times, and what annoyed me most was the film celebrated him and his pompous attitudes. It did not attempt to tackle them enough for my liking, and celebrated him too much. Firstly, I found his holier than thou attitude towards the general population and feeling of superiority because he (and his family) didn’t take part in what everyone else did (shopping, playing video games, and watching tv) to be very alienating.

The worst scene, without doubt, that made me take a massive dislike to him was the scene where he was invited into someone’s house and completely refused to respect their decision to not tell their children what happened to their aunt. Not only that he insulted the intelligence of their children by showing them up because they did not adequately explain what the Bill of Rights was. The film presented this as a high-five moment because his daughter was able to recite and eloquently explain what it is.

It’s because computer games make people dumb, obviously. I once completed a whole Premier League season in one day on the FIFA game, the director must think I sit naked completely covered in my own shit, hammering away at the buttons. What winds me up about that scene is the film doesn’t not tackle the worthlessness of knowing all this stuff without having the ability to socialise, function and build relationships in the outside world. It even shows the eldest son getting with a girl even though he barely functioned on a social level. Realistically he would have not gotten with that girl (and I know about not getting with girls).

I have no issue with the lifestyle presented in the film (I like to kid myself), what I do have an issue is the father figure. He just did whatever the hell the wanted. I feel the film celebrated his superior attitude and the way he showed those dunderheads sitting on their arses playing PC games to be stupid morons was patronising and insulting. I don’t think it’s right kids sit playing video games all day but I do object to the way the film showed this and was condescending towards people who live this lifestyle.

The fact he felt he and family are better than other people because of their way of life, and was very happy to show it, really hindered me from liking the film. The film also celebrated this behaviour and justified it too much. To me the film looked down on the suburban family. Fuck this film.

People love Independence Day but seem to hate its sequel (both the audience and critical rating are lower tn 35%) which baffles me because it’s the same thing. Yes, there’s no Will Smith and he’s replaced by some cheap, knock off but when was the last time Will Smith was actually good in something? He was ok in Suicide Squad but the film was rubbish anyway, so it’s easy to come to the conclusion that film wouldn’t have faired any better if he was in it.  Anyway I saw this on my birthday last year and was pretty set to enjoy this however rubbish it is and enjoyed it I did

For those who love Independence Day (of which there are many, myself included) this isn't really problem. The film has the lame, corny dialogue, the overabundance of characters (including a John Oliver lookalike) and spectacular special effects which includes a great scene of the Burj Khalifa crashing into Central London because the alien invaders always seem to like getting the landmarks. The film is a little slower in getting going as we are introduced to new characters and well as some returning favourites. The new characters try their best but Jessie Usher’s Dylan Hiller feels like a poor man’s Will Smith and Liam Hemsworth’s Jake Morrison doesn’t fare much better. Acting heavy weight Charlotte Gainsbourg gets a raw deal as it seemed she was badly dubbed. The returning characters, Jeff Goldblum and Bill Pullman, fare much better.

However, once the giant ship arrives, the sheer stupidly enjoyable spectacle begins and the nonsense commences. It is this point the film becomes laugh a minute as I began to embrace the stupidity of the film and found sprinklings of humour in amongst all the carnage. Importantly, it keeps the first film’s sense of fun intact and does a decent job at managing the build-up before the alien ship attacks (though the film first did do this better). The film also manages to keep the pace consistent throughout its relatively short two hour run time even though story wise the film does seem to feel like it had five different writers all throwing their ideas on the page.

There are of course many issues with the film, there are too many characters (the film is an hour old and we are still being introduced to new characters) and there are various needless subplots and relationships. The rivalry between Jake Morrison and Dylan Dubrow-Hiller didn’t actually build up to anything worthwhile and was almost entirely pointless, in fact it probably would have been better to remove Jake’s friend and have Captain Hiller as his closest friend.

Independence Day Resurgence is big dumb, fun with a million characters all sprouting utter nonsense from start to finish. I wanted a stupid film and I got a stupid film.